The Digital Gallery of Hōryūji Treasures 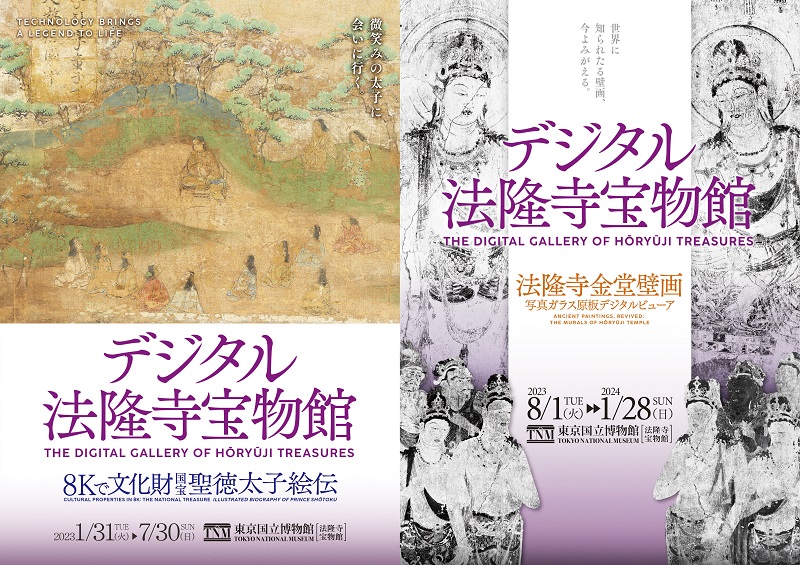 Prince Shōtoku founded the famous Hōryūji Temple in Nara at the dawn of the 7th century. The buildings of its Western Precinct—including the Kondō Hall, Five-story Pagoda, Chūmon Gate, and Covered Corridor—are among the oldest surviving wooden structures on earth. In 1878, during the Meiji era, the temple presented more than three hundred of its historic treasures to the Imperial Household. The Gallery of Hōryūji Treasures was established in 1964 to preserve and display these priceless objects at the Tokyo National Museum. In 1999, the gallery was reconstructed into the building you see today.

In The Digital Gallery of Hōryūji Treasures, visitors can examine and interact with digital reproductions of historic objects from the temple that cannot be kept on permanent exhibit. Reproductions on graphic panels and a massive 8K monitor give visitors the opportunity to authentically experience these works of art and the freedom to study them down to their smallest detail. The exhibit will focus on the National Treasure Illustrated Biography of Prince Shōtoku starting on January 31st, 2023, followed by the Murals in the Kondō Hall on August 1st. Other replicas reconstruct what Gigaku masks and costumes may have looked like in their heyday, offering a window into the colorful world of this performing art, which once enthralled people.

Prince Shotoku (574–622) was the second son of Emperor Yōmei. During the reign of Empress Suiko, the prince is believed to have authored Japan’s first constitution while also actively promoting Buddhism and sending envoys to China to learn more about this religion. Painted in 1069 by Hata no Chitei, this is the oldest surviving version of the Illustrated Biography of Prince Shotōku. The painting depicts fifty-seven episodes based on Shotōku Taishi Denryaku, the definitive account of the prince’s life completed in the early tenth century. The ten paintings originally decorated the inner walls of the Hall of Paintings in Hōryūji Temple. The composition shows Ikaruga Palace at the center, but also includes views of Asuka, Naniwa, and even Mount Heng in China.

Note: Reproductions on graphic panels in the same sizes as originals are to be displayed. The original paintings will not be on view as part of this exhibition due to the due to their fragility. 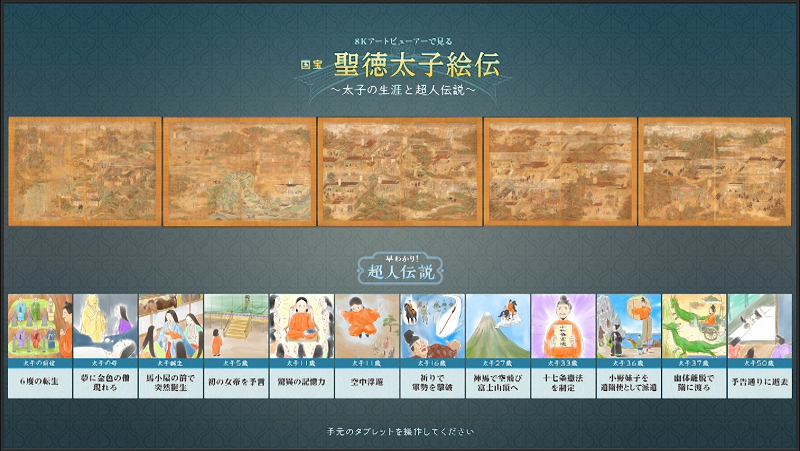 The National Treasure Illustrated Biography of Prince Shōtoku is a series of paintings that once adorned the inner walls of the Hall of Paintings at Hōryūji Temple. These ten large panels depict fifty-seven of Prince Shōtoku’s exploits. Created by Hata no Chitei in 1069, during the Heian period, they are the oldest paintings that chronicle the prince’s life and deeds, and they exemplify the early Yamato-e style of classical Japanese painting. But time has taken a considerable toll on the Illustrated Biography of Prince Shōtoku, and the fine details are no longer visible to the naked eye.

Cultural Properties in 8K presents ultrahigh-resolution images of this priceless painting on a large 8K monitor. Each 1.9-by-1.5-meter painting in the illustrated biography was photographed in twenty-eight sections, which were then recombined to create 1.8 billion pixels of data per painting. The application processes two panels—3.6 billion pixels of data—in real time as viewers explore the painting at their own pace on a 70-inch 8K monitor. 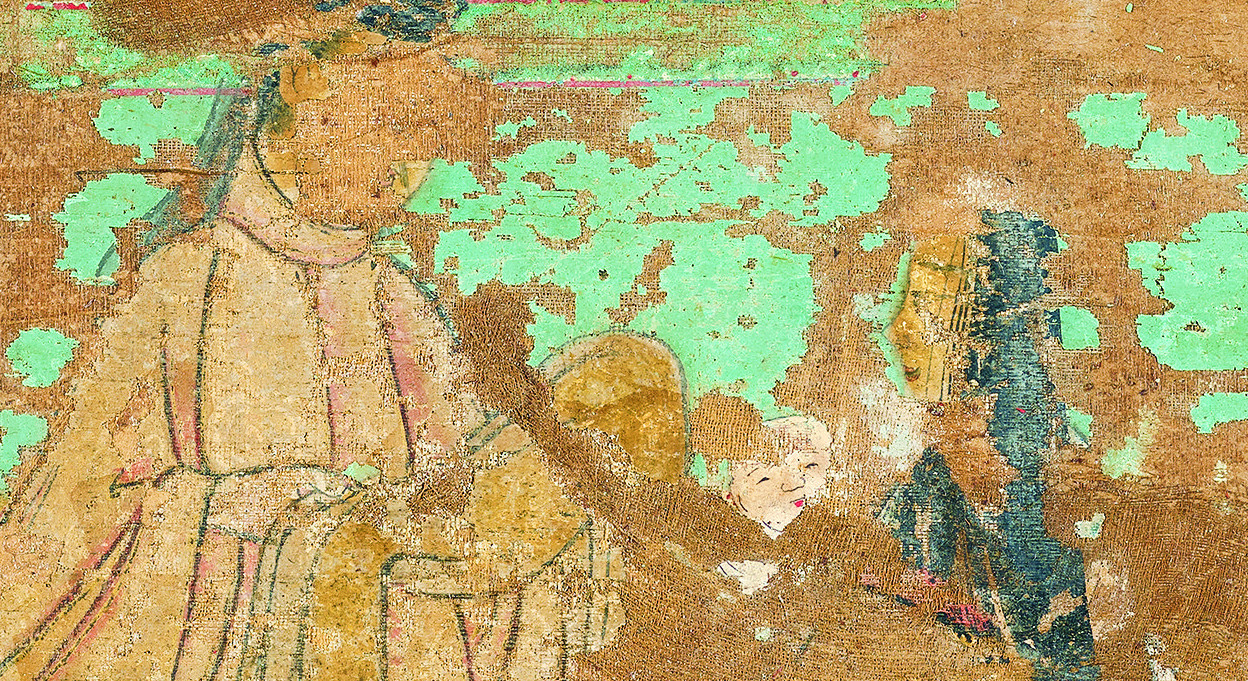 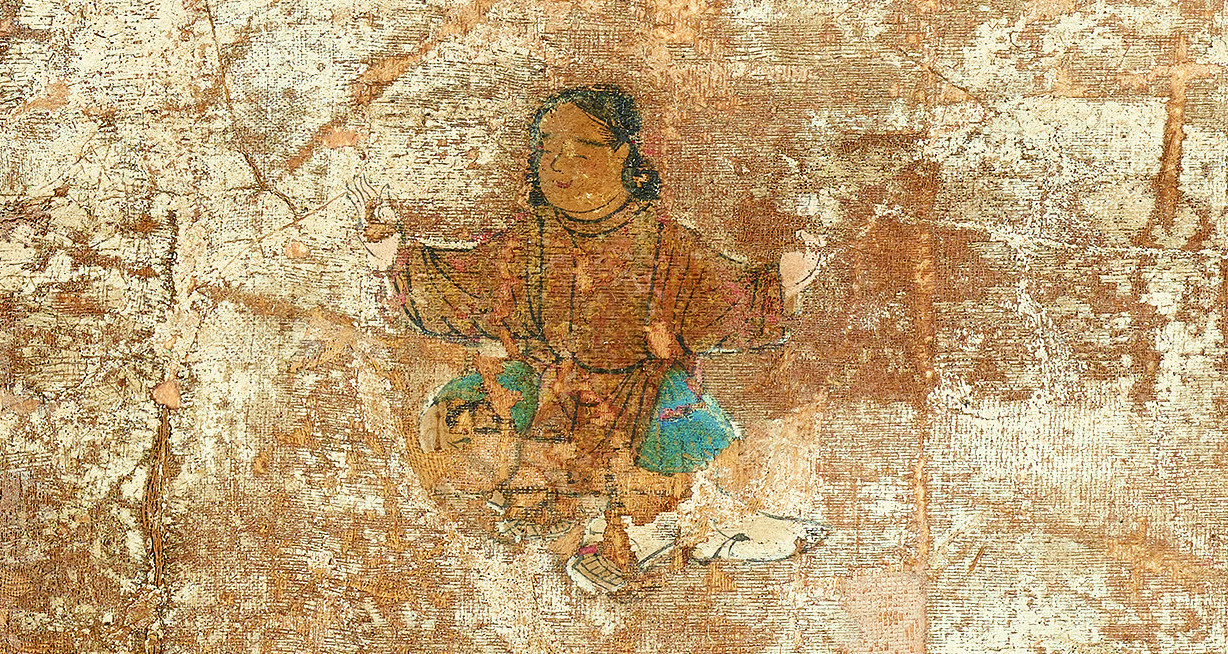 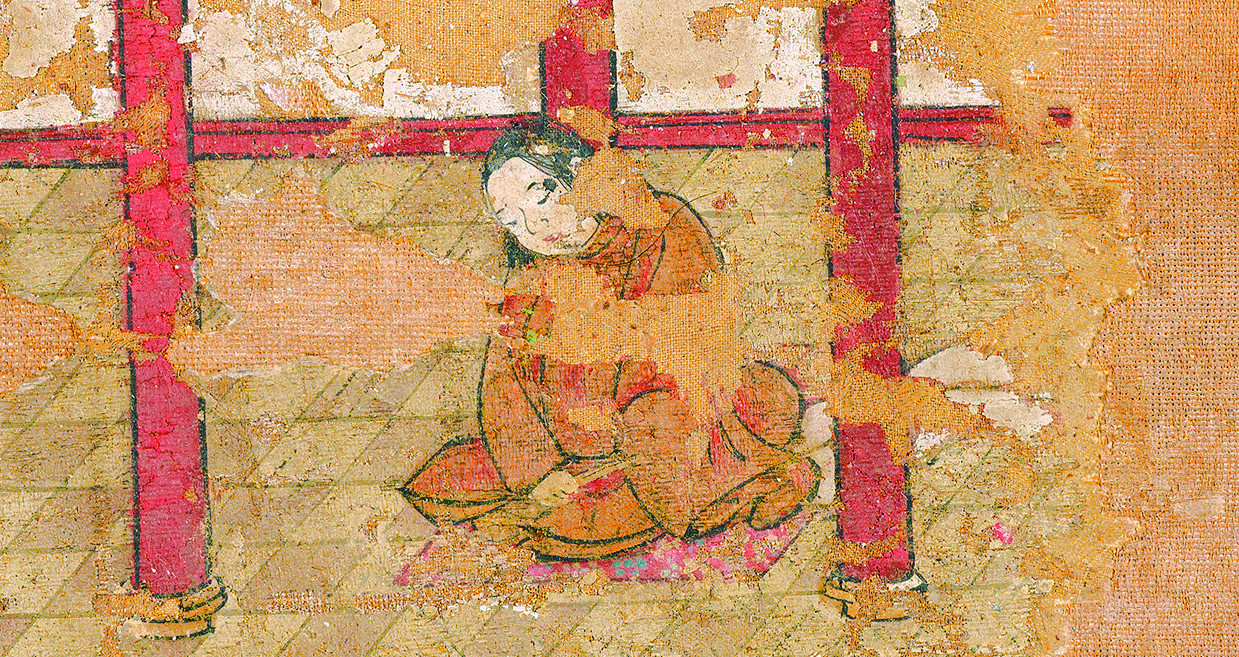 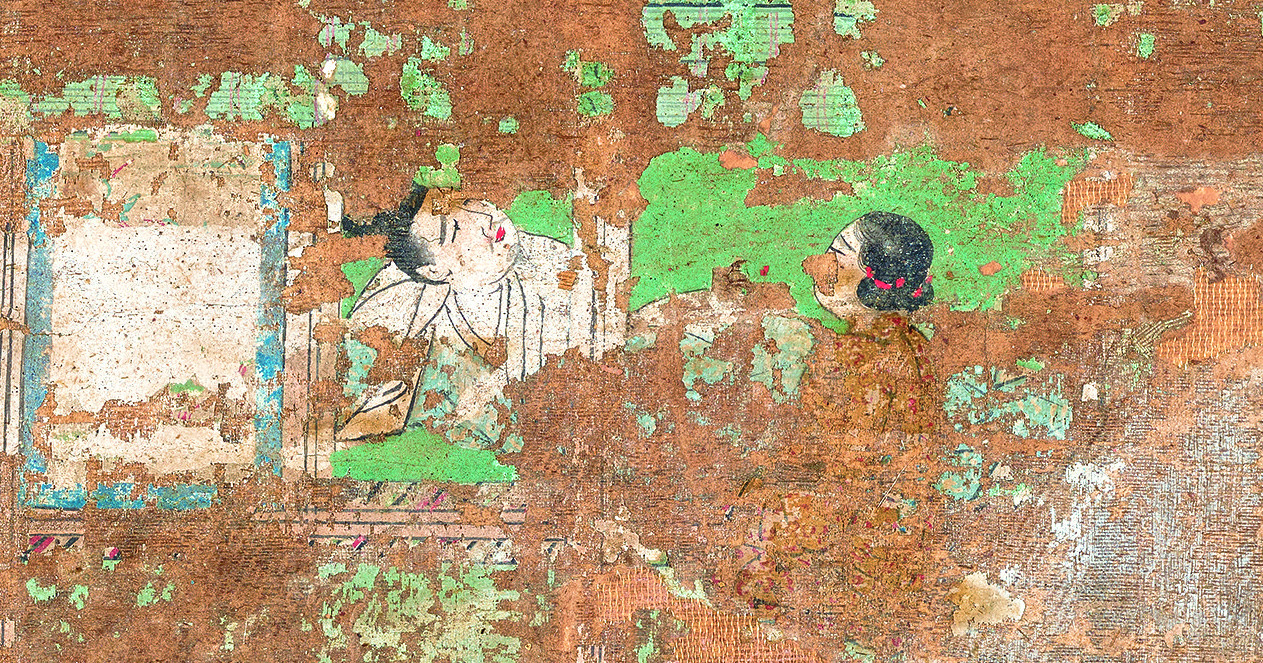 The originals of these twelve murals—four large buddhas interspersed with eight smaller bodhisattvas—were highly regarded before they were damaged by fire. In 1920, Kuki Ryūichi, the first Director General of the Imperial Museum (forerunner of the Tokyo National Museum) wrote the following in his Investigative Report on Means to Preserve the Murals of Hōryūji Temple:

“The murals that adorn Hōryūji Temple’s Kondō Hall are generally recognized to be the finest known examples of the art form in any Asian nation.”

These glass photographic plates were designated Important Cultural Property in 2015, along with the negatives in the possession of Benrido, Inc. (eighty-three photographs taken at the same time, including four-color separation and infrared photographs). The plates were then digitized only after five years of cleaning and restoration. 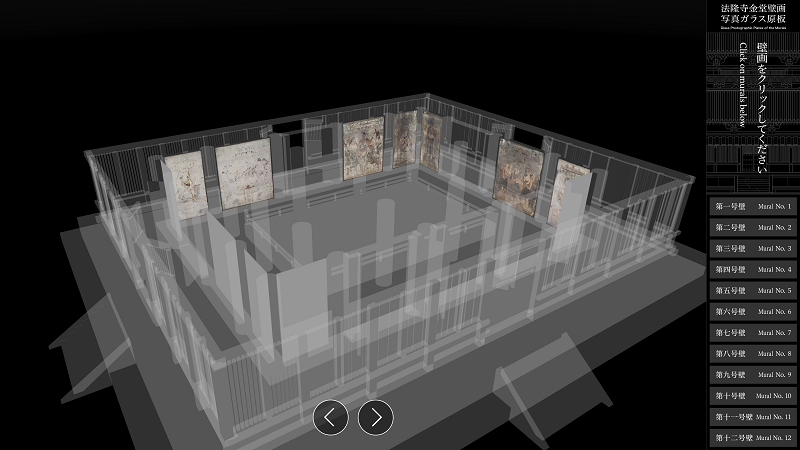 A series of murals, thought to have been painted between the latter half of the 7th century and the early 8th century, once covered the inner walls of the outer sanctum in the Kondō Hall of Hōryūji Temple. The originals suffered damage in a fire on January 26th, 1949; but these glass photographic plates, created in 1935 by the fine-art printing company Benrido show us what they once looked like.
The digital viewer presents ultrahigh-resolution images of the original plates on a large 8K monitor. Each plate was scanned at 1,500 dpi in five sections using a special scanner developed for this purpose. Distortions caused by the camera lens when the photos were taken and contrast issues that arose during the development process were then digitally corrected, and the scans were joined to create more than three billion pixels of data for each large mural and 1.7 billion pixels for each small one.
The Digital Viewer was released online in 2020 and is available on PCs, tablets, and smartphones. But at this exhibition, visitors will be immersed in this masterpiece of Buddhist painting and its beautiful brushwork through a 70-inch 8K monitor. 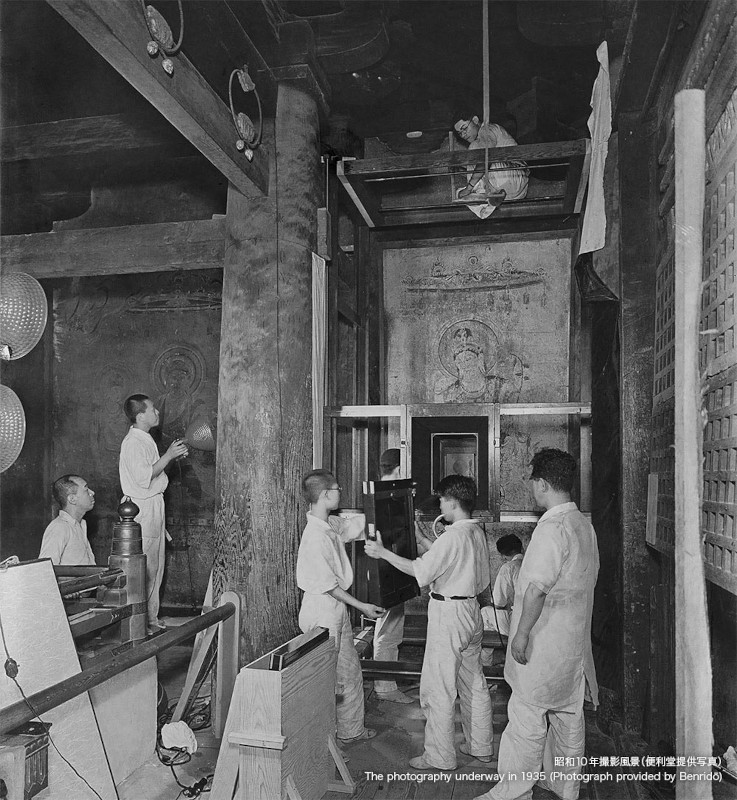 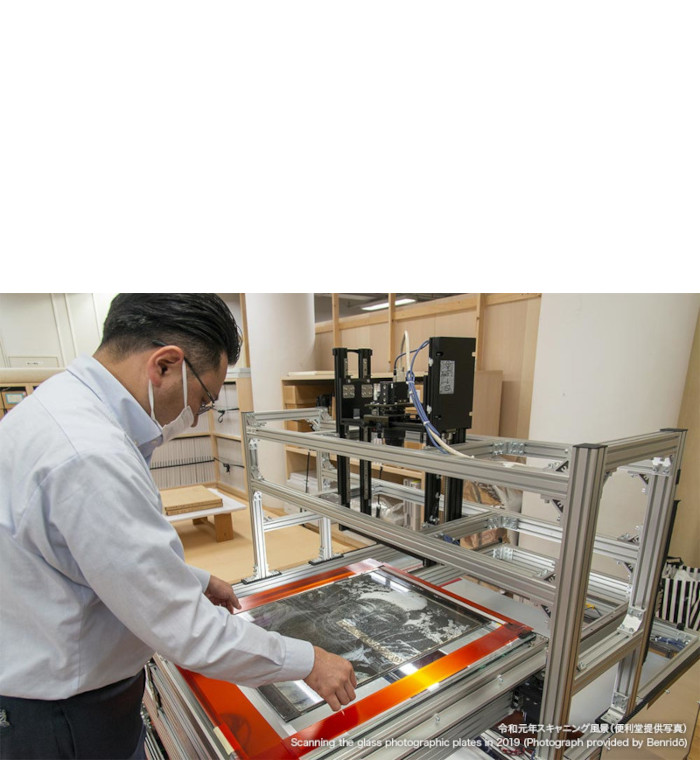 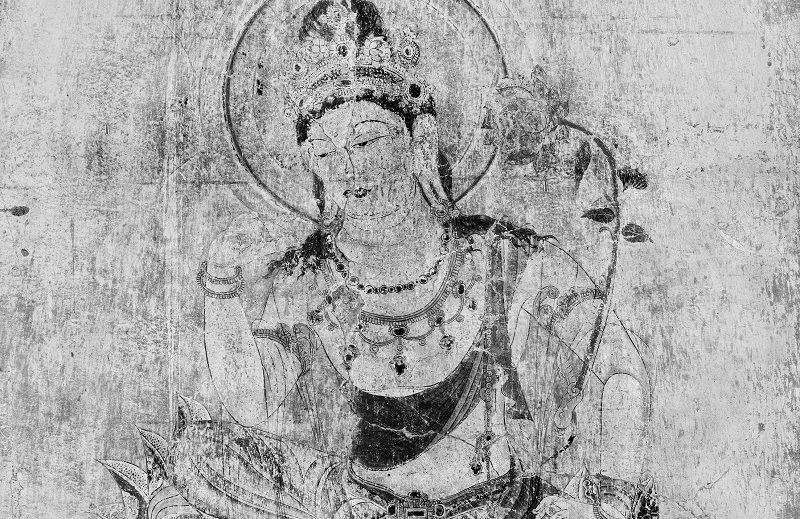 Mural No. 2: Bodhisattva (detail) in the Kondō Hall of Hōryūji Temple 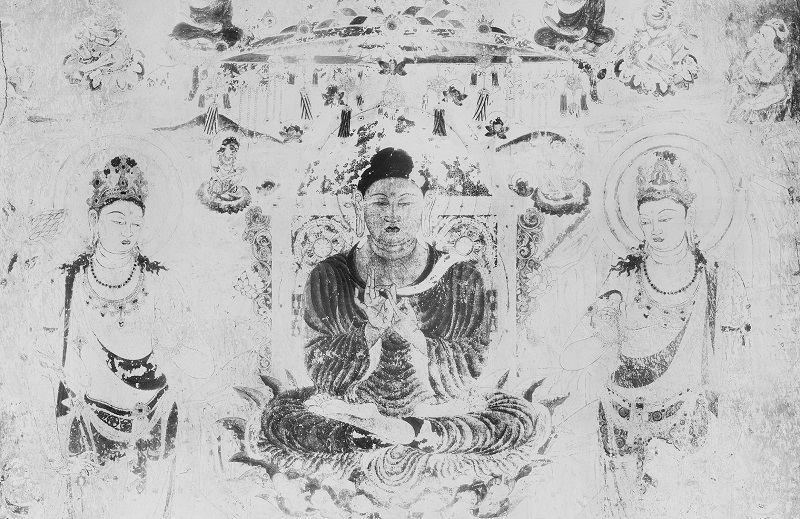 Mural No. 6: The Pure Land of Amida (detail) in the Kondō Hall of Hōryūji Temple

Gigaku, with Reconstructed Masks and Costumes Gigaku, a form of masked, outdoor performance, reached Japan from mainland Asia during the Asuka period (593–710). The fifth painting in the National Treasure Illustrated Biography of Prince Shōtoku shows the prince assembling youths to learn this art. Their teacher, a performer named Mimashi, studied Gigaku while living in what is now China before he returned to Japan via the Korean peninsula in 612, during the reign of Empress Suiko. Gigaku declined in the Heian period (794–1192) and is now known only through written records and inscriptions on masks.

The Hōryūji Temple treasures in the Tokyo National Museum’s collection include thirty-one Gigaku masks. Although the Shōsōin Imperial Repository and Tōdaiji Temple in Nara preserve other examples, most date from the Nara period (710–794). Only the Hōryūji collection includes masks made in the Asuka period. The Tokyo National Museum and the National Center for the Promotion of Cultural Properties collaborated to create replicas of two Gigaku masks in 2019, and two costumes in 2021, consulting surviving records to recreate what these items originally looked like.

The original masks and costumes, which were presented to the Imperial Household by Hōryūji Temple, can be viewed in Room 3 of the Gallery of Hōryūji Treasures at the Tokyo National Museum. For purposes of preservation, viewing is restricted to Fridays and Saturdays only. 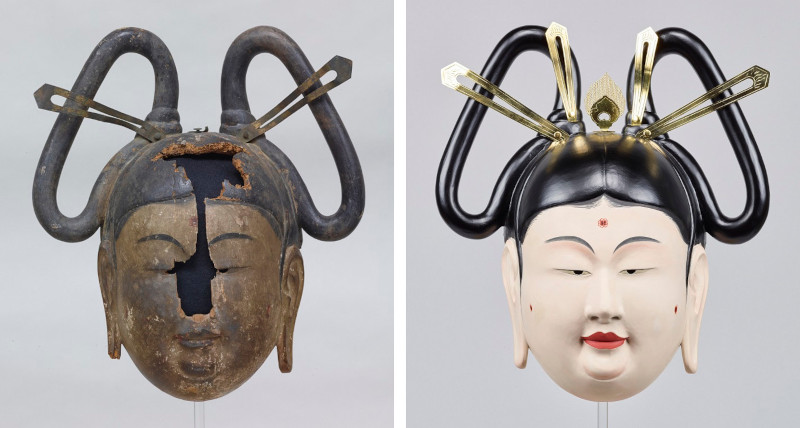 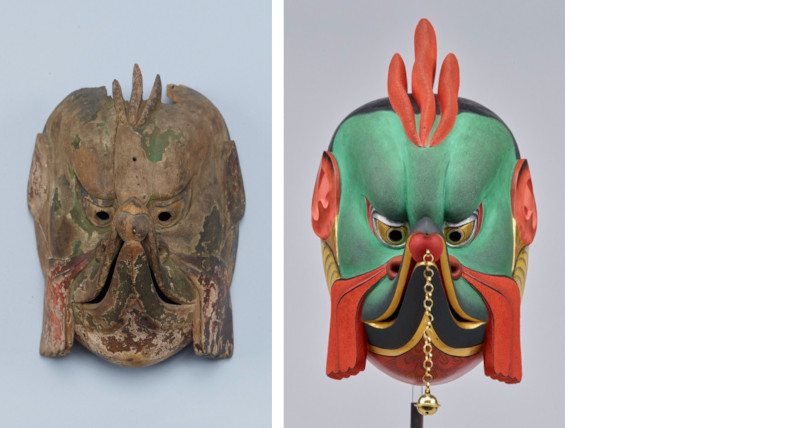 Newly open from January 31st, 2023 (Contents will be changed every six months.)

*This project is supported by the Agency for Cultural Affairs, Government of Japan, through the Japan Arts Council, Fiscal Year 2022.