The Door to Japanese Art: The Four Seasons 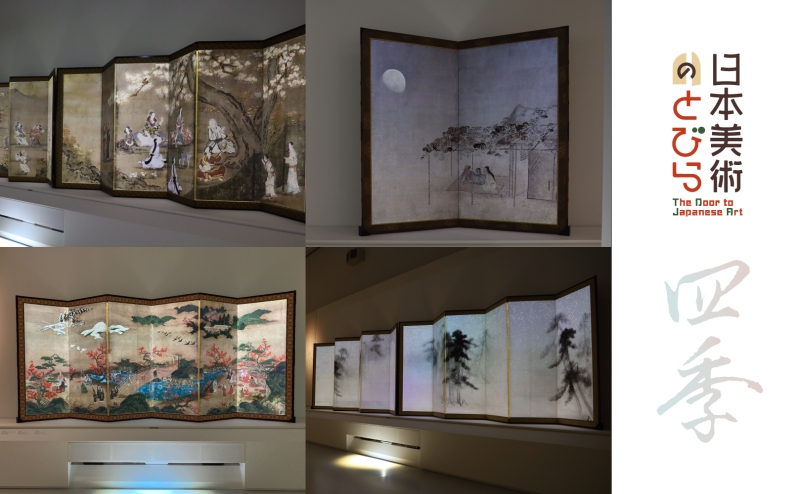 In this gallery, visitors are invited to view, experience, and appreciate scenes of the four seasons reproduced on folding screens using projection mapping and high-resolution facsimiles. While rarely seen in modern life, folding screens once served to partition rooms, keep drafts at bay, and protect against prying eyes. People also treasured folding screens for the artistic value they brought to living spaces. Though born out of this largely pragmatic context, many folding screens were handed down over the generations and are now preserved as cultural heritage. Try to put yourself in the shoes of the people who made, used, and passed down these folding screens as you imagine the sounds, spaces, and scenes existing within and around them.

Spring: Amusements under the Blossoms

Painted around the early 1600s, Amusements under the Blossoms shows people dancing and picnicking under flowering trees. The dancers are women draped in the latest fashions. Nearby a group of women dressed as men carry swords at their waists. Their eye-catching appearances suggest they are performing Okuni Kabuki, a popular dance-drama at the time that was the forerunner to modern Kabuki. The painting brilliantly captures Japanese people’s admiration of nature and particular affinity for spring. Its scenes are convincing enough to make modern viewers wish they could dance and sing as well.The accompanying video recreates a joyful scene of women in fine clothes having merrymaking under flowering crabapple and cherry trees in full bloom. Take a moment to imagine that you have stumbled on noble peopel’s flower-viewing parties after traveling 400 years into the past.

* The original right screen's central portion was lost in the Great Kantō Earthquake of 1923 and has since been replaced with blank paper. The high-resolution facsimile shown in this gallery restored the missing portion by referencing the only extant image of the original painting intact, which is recorded on a glass plate.

Cooling Off depicts a family of three gazing up at the full moon. A cool breeze refreshes them as they rest under the canopy of a gourd trellis. The scene contains a snapshot of the lives of ordinary people. The moon rises in a darkening sky, likely indicating that night is soon to fall. The painting evokes the end of summer, hinting at the coming autumn with its rising full moon and the ripening gourds growing from the vines on the trellis. The video shows a scene of night descending. The image, which also features the changing phases of the moon, might remind you of peaceful moments in your own life. Think back on your own memories of feeling wind, light, air, and humidity as you view the video. 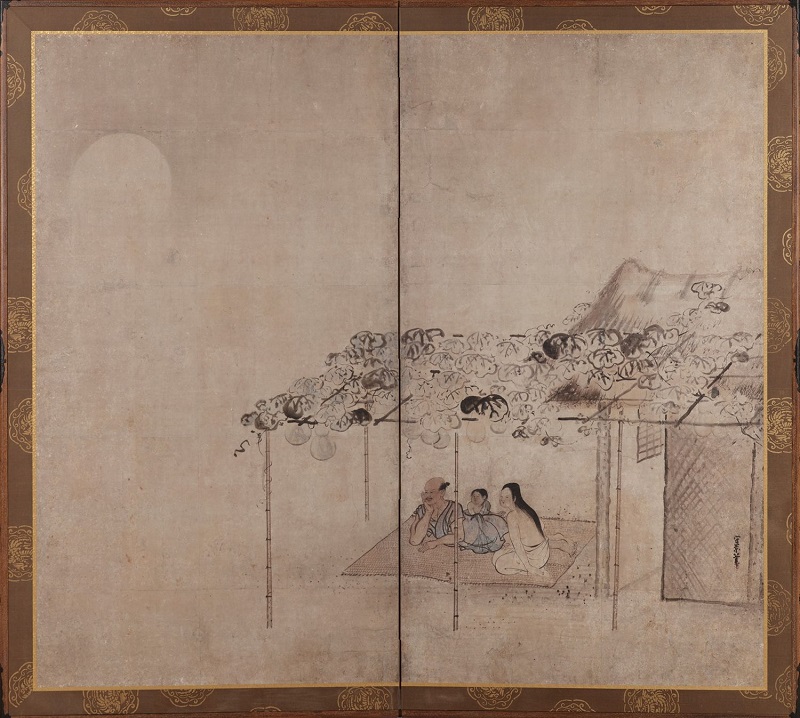 Viewing Maple Leaves shows revelers taking in the brilliant autumn hues by the Kiyotaki Riverin Takao, an area in northern Kyoto. The painting depicts scenes of people from the Muromachi period (1392–1573) enjoying the shifting face of nature as autumn gives way to witner. The work centers on monks at the foot of the bridge and also shows women with cihldren admiring the autumn foliage, people playing flutes and chatting as they stroll, and a group of men in a circle dancing. By looking at this work, modern viewers may feel they too want to gaze on the brillian htues of autumn. In the video, you can see people enjoying merrymaking and the changing colosr of the leaves during the last days of autumn. Take a strolls a you enjoy the scenes of leaves blowing in the wind, geese taking flight, and egrets descending before the snow-capped peak of Mount Atago.

Hailed as the greatest Japanese ink painting ever created, Pine Forest depicts a grove of pines in late winter. The artist used bold brushstrokes and different saturations of ink to paint the sweeping pine trees. An impression of damp, cold air and the way the trees appear ot fade in and out of the mist set the overall tone of the work. The video shows a full day passing in the pine forest in late winter. The pine trees loom out from the morning mist, gradually change color in the sun, and get dusted in snow as evening falls. Try to place yourself in the scene on the folding screens. You might find you can smell the pines and see birds flitting among the trees, or you might even hear the waves of and feel the damp air from a nearby shore as you gaze at the unfolding scenes.